skip to main | skip to sidebar

I was fortunate to receive a copy of THE TESTING from NetGalley. The book is due to be released June 4.  Joelle Charbonneau has previously published adult mysteries, but this is her first venture into the YA market.

THE TESTING is widely being compared to THE HUNGER GAMES. Read this as a plus. Joelle has extracted many of the elements that made THG popular and inserted them in her own unique dystopian setting. Yes, I emphasize unique. Granted, both trilogies have groups of coming of age teens brought together for what turns into life and death struggles, but the motivation of THE TESTING is to find the strongest future leaders for their nation struggling to recover after devistation from war. This sets up a completely different set of motivations for her characters than THG's reality broadcast aimed at keeping everyone outside the Capital in line. (I concede that both governments are a bit warped, but what dystopian government isn't?)

Plot: Sixteen year old Cia and three other graduates from her colony have been chosen for The Testing to attend the University. Although she feels it is a great honor, her father, who has been through the testing, sends her off with the warning to trust nobody.  The Testing quickly becomes a life and death struggle to determine who will be chosen to fill a limited number of spots at the University to be trained to be the future leaders of their country.

Small spoiler because you may want to know: Yes, there is a romantic triangle.

I'll sum up my feelings this way:  Once into the book, I really had issues putting it down to do those minor things in life like work, eating and sleeping. A second testiment to how much I enjoyed THE TESTING is I'm actually writing a review. (Check out how long it has been since my last blog post!)


Posted by Jim Danielson at 6:35 PM No comments:

When Yeats and his parents visit his grandmother's creepy old house, Yeats reunites a pair of pirate bookends and uncovers the amazing truth: Years ago, Yeats's father traveled into The Arabian Nights with a friend, and the friend, Shari, is still stuck in the tales. Assisted by the not-always-trustworthy pirates, Yeats must navigate the unfamiliar world of the story of Shaharazad--dodging guards and tigers and the dangerous things that lurk in the margins of the stories--in order to save Shari and bring peace to his family.

David Ward has created a fantasy rich with atmosphere and full of heart-stopping drama.

My Review:
Characters: The reader can't help but like Yeats, a twelve-year-old boy willing to jump into the dangerous unknown to save his family, which is being torn apart by his father's depression. The magical pirate book ends kept me smiling and actually had me laughing out loud during the trip back into the book.

Setting: David Ward has created interesting surroundings both at Yeats' grandmother's house and in the world of Shaharazod. Although I haven't recently read One Thousand and One Arabian Nights, I felt like David Ward knew every possible detail about the setting.

Plot: The action is non-stop from the time Yeats finds the magical book ends through the time he completes his quest. The action and plot twists made it difficult to put the book down. The one problem I had was the story did not take off until about Chapter Three.

Overall: I highly recommend this book for middle grade boys and girls. My caution is to make sure young readers are not discouraged by the opening chapter. I fear some of them might find the multiple points of view hard to follow while Ward initially introduces us to the characters at Grandmother's house. I might add the issue disappears for the remainder of the book. Find a way to keep them interested through Chapter Three -- they won't be disappointed.

Review: Your Own Sylvia: a verse portrait of Sylvia Plath by Stephanie Hemphill 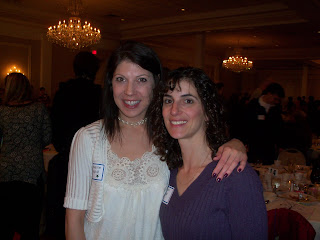 Stephanie Hemphill (left) with Alison Hertz at the 2011 Anderson's Breakfast.
What could possibly be more appropriate than reading the story of a gifted American poet during National Poetry Month? And the answer is: reading that story written in verse by another gifted American poet.
Stephanie Hemphill has taken the story of Sylvia Plath and told it using a series of moving verses through the eyes of the people in Sylvia's life. Each verse is accompanied by a short, unobtrusive history of facts surrounding it.
If you're looking for a great National Poetry Month read, I highly recommend YOUR OWN SYLVIA. The book was published in 2007 by Alfred A. Knopf and was a Printz Honor Book recipient.
Posted by Jim Danielson at 7:50 PM No comments:

Things Recently Learned about my WIP

I was reminded recently while attending a Heartsaver First Aid course for work that writing material can come from just about anywhere. The instructor told a true story about an auto accident/rescue attempt that wound up costing the rescuer's life. It fits so much better than him just being killed in the crash itself. Had you told me I would change the story based on something from that class, I probably would have just laughed.

The second thing I learned based on reading I did for the Anderson's YA Conference is that a lot of YA is told in multiple voices. I'm doing that now too!

The third thing I learned (today) is how excited I am about this WIP. Ghost story + YA + in verse + kind of aimed at guys (involves sports) + multiple voices = Jim Excited.
Posted by Jim Danielson at 5:30 PM 9 comments: 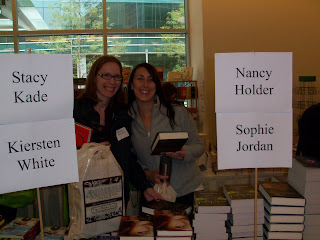 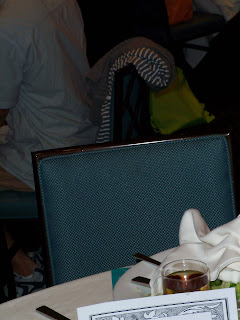 A picture of the author that graced our table. (At one point, an Anderson's employee pointed out to David Levithan that the author chair reserved at our table was empty--he looked ever so briefly and headed toward the back of the room. In all fairness, there were more tables than authors.) 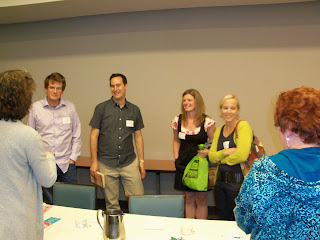 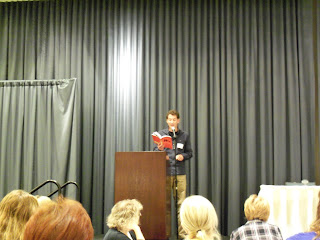 Kenneth Oppel holding a copy of his book HALF BROTHER. 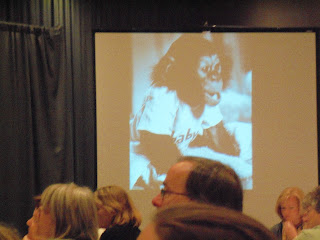 And a slide of the half brother.
A few tidbits:

John Green says "maybe when I get old I'll have to do the Richard Peck trick and write historical fiction."

David Levithan says "Our job as writers is to choose the exact right words to express our feelings."

Blue Balliett wrote the ending of Chasing Vermeer on a piece of cardboard she pulled from her garbage can in the middle of the night. It turned out to be packaging cardboard from her son's boxers. He made her swear she'd never tell anyone. Hmmm... I wonder if she kept that promise.

When Lisa asked about interesting fan letters, Kenneth Oppel said something to this effect:

He got a letter about his Silverwings series which avoids using colors because it is about bats (which can see only in black and white). The young girl said you mention "yellow" on page 12. You said "an" instead of "and" on page 50. I've noted similar problems in C. S. Lewis' Lion, Witch and Wardrobe series. I wrote him too. He never wrote back or made the corrections because he's dead. Hopefully you can correct yours. Kenneth suspects she will someday be a copy editor.

I hope you've enjoyed my four part account of the conference!
Posted by Jim Danielson at 7:30 PM 2 comments:

Jim Danielson
I write primarily middle grade fiction, although I do have a picture book submitted. As for subject matter: ghost mystery and time suspension would be the best general descriptions for my two novels currently in re-writes.

Awarded by THE RIANT WRITER